GIL
Gil is one of the original owners of Gillin Custom Design and opened it with Linda in 2006.  Thirteen years later the vision of opening a shop that completed high end builds from start to finish came to fruition with GCD Auto Studio. He’s currently in charge of client acquisition, all the marketing for the company including the website and assists in designing projects. His special talent, besides marketing, is comedy…telling jokes and doing impersonations.  Gil likes listening to sports talk radio and watching Motor Trend TV.  On his days off, he spends time with friends smoking cigars, enjoying some bourbon and discussing the latest car trends.  His dream classic car is a 1970 Buick Riviera which he’s currently working on.

LINDA
Linda grew up with a love for muscle cars, the 1967 Camaro being her favorite.  She has an extensive high-end retail background with a focus on management, store build out and merchandising.  She graduated with a Bachelor Degree in Art History and has a certification in interior design from NYU.  All of these components led her to start Gillin Custom Design with Gil in 2006.  She knew opening GCD Auto Studio was the next logical step in achieving her goals.  She is currently in charge of client relations, operations, social media and assists with design. Outside the shop, Linda enjoys going to wineries, breweries, taking cooking classes and visiting museums.  Her true passion is photography and cultivating her skills and capturing the moment is how she spends most of her free time.

JOHN
Growing up when muscle cars really hit the streets, John had an eye for Corvettes, Camaros and trucks of all kinds. He was a gearhead right from the start as he regularly worked on them and raced them at Island Dragway. With his passion for cars he carved out a storied career in the automotive industry for over 38 years. Initially being mentored by a tough tradesman in Orange County’s largest and busiest autobody shop, he learned all stages of automotive repair from Refinishing, Parts Managing, Job Estimating and Production Management. John eventually owned the autobody shop he started in. To add to his automotive knowledge, he even crossed the desk and spent several years as an Auto Damage Claims Manager for one of the nation’s largest insurers. Now switching gears for his automotive second act, John has returned to his original passion and has partnered with Gil and Linda to help manage the Mechanical, Fabrication and Refinishing portion of builds. His passion is classic cars, including his own 69 Camaro resto-mod and 64 Jeep CJ3B restoration. In his spare time, John and his wife Chris love to travel in their RV with their dogs finding great festivals and events near microbreweries and fun food offerings. 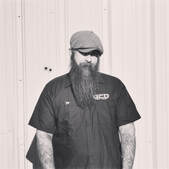 Jay
Jay started working on cars with his father at the age of nine and grew up around them.  When he graduated high school he needed a career path so something in the automotive field was a natural transition.  He started working in a restoration shop and moved closer to home to work in a collision shop where he stayed for 16 years and moved up through to run the paint department.  He helped open GCD and now calls this shop his home.  He chose to paint over the other automotive career options because it’s the most creative and artistic aspect of a build and the first thing you see when looking at a vehicle.  He has 6 PPG Certifications; 2 of them are Master Certifications.  His favorite projects are the ones where he can be most creative creating custom colors and challenging himself to make something unique.  In his free time he works on his own vehicle projects and spends time with his son, DeAngelo who aspires to follow in his father’s footsteps and have a career in the automotive field.

Ryan
Ryan has been around classic cars since he was born.  At any given time there were at least a dozen muscle cars in his driveway; in fact, his first ride was in his car seat in the back of a big block 1964 GTO when he was an infant.  Growing up he would help his father work on cars and he really took to it after graduating high school.  His first job was at Lothar’s where he learned body work and prep skills under the mentorship of their professional and educated employees.  Wanting to improve and expand upon his skills he started part time at Gillin Custom Design learning to fabricate pieces for car interiors.  Seeing the continued work ethic we knew he would make a great fit and GCD Auto Studio and we brought him on board full time as a bodywork and prep specialist and continue to have him fabricate car interior pieces.

Colm
Colm has over 20 years of automotive industry experience.  His passion for anything with a motor sparked at a young age when his grandfather first showed him under the hood of his Buick.  Colm started off in a body shop and quickly realized there were many other automotive aspects and systems that he wanted to master.  Since that time, he developed an extensive and diverse skill set which has granted him much success within the automotive industry.  He is an ASE Master Technician, Advanced Level Performance Specialist and a Certified Diagnostic and Repair Instructor. His creative skills come in to play when fabricating custom pieces in the wood and metal studios here at the shop.  During his time off he enjoys riding his motorcycle, fishing with his father and spending time with family and friends.